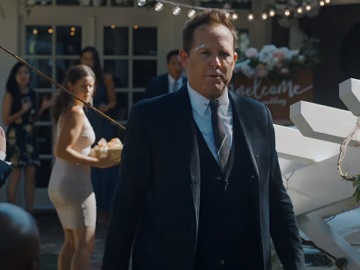 Allstate has released a new commercial starring its longtime spokesman Mayhem to promote its home and auto insurance coverages.

The spot features the havoc-wreaking character, played by Dean Winters, as a groom’s football-obsessed best man who explains to the groom that having his big day during the Big Game is the worst because he is physically there, at the wedding, but mentally he is actually somewhere else – thinking about the game, obviously. “When all eyes are on you, my eyes are glued to the game,” he also says. It turns out his desire to watch the game is so big he manages to destroy lots of things at the venue and even the car the newlyweds were supposed to leave the ceremony in.

At the end of the commercial, Mayhem points out that, if you didn’t bundle your home and auto insurance, all those damages could be tough to tackle and encourages viewers to get Allstate and be better protected from Mayhem.