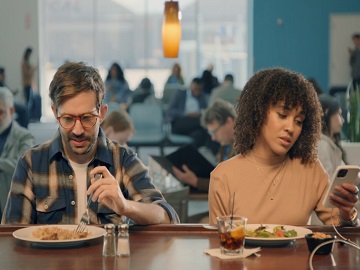 Allegiant Airlines has launched a new campaign to promote its low fares and nonstop flights.

“‘Connections, Connections’ the dating app exclusively for singles who are in your area for two painful hours waiting for their connecting flight,” a female voiceover says at the end of the commercial, which sees the man eating a meal in an airport restaurant, next to the woman, who’s using his charger. “So how’s the charger working out?” he asks her, but she doesn’t bother to answer, being more interested in finding new connections for her flights.

A male voiceover says “Connections, Connections. Not necessary for those who live the non-stop life”. An onscreen line informs that Allegiant Airlines has low fares and nonstop flights.