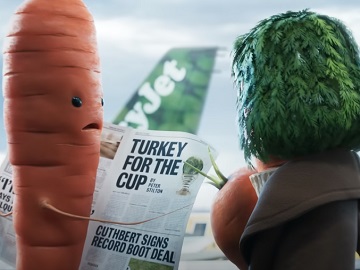 Aldi has unveiled its Christmas advert, starring its longtime mascot, Kevin the Carrot.

The spot, created by McCann, pays homage to Nike’s famous Airport 1998 World Cup ad and features Kevin the Carrot and his veggie family on an airport, ready for their “PeasyJet” flight. Kevin is reading the newspaper headline and expresses his distaste for the World Cup happening over the holidays by scrunching up the paper into a ball and throwing it over his shoulders.

At this point, familiar sports stars, such as lemon-shaped Ronaldi, Messi, MmmBap, Roy Bean, Macaroony, Beth Swede and Marrowdona, shows up, using it for a kickabout. They dribble it around the airport chairs, spilling cups of coffee sometimes, and they eventually pass it to Kevin, who misses the shot and also his flight to Paris.

The song playing in the advert is “A Little Less Conversation” by Elvis vs JXL.

The ad ends with a nod to the iconic “Home Alone” scene when Catherine O’Hara’s character realizes her son Kevin has been left behind.