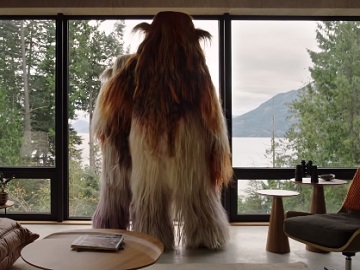 The commercial, based on the idea that strangers aren’t that strange, features a family of three unusual-looking, shaggy “guests” spending a day and a night in their remote, rural Airbnb listing. They are shown enjoying their morning coffee, family games and a movie night, and leaving the house in a perfect state when they leave.

The listing is The Cedar House, an entire residential home located in Britannia Beach, British Columbia, Canada, and hosted by Paulina. The house is at a 12-minute drive to some of the world’s best mountain biking, 40-min to Whistler (skiing/boarding, biking, hiking), and a 35-minute drive to Vancouver.

The soundtrack music is Kevin Morby’s single Beautiful Strangers. The song is available for purchase on Amazon for $1.29.

Founded in 2007, Airbnb has now more than 4 million Hosts across nearly 6 million listings and every day, Hosts open their doors to over half a million strangers. The company says that they are focused on making it easier to become a Host, with a simplified sign-up process that takes only 10 steps to set up a new listing.