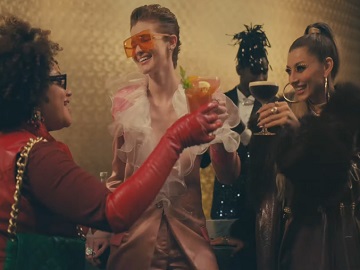 Vodka brand Absolut has launched its biggest global ad campaign in over a decade, titled “The World of Absolut Cocktails. Born to Mix.” and aimed to inspire people of all ages 21+ and backgrounds to come together to mix ideas and drinks, respectfully and responsibly.

The main spot, created by agency Ogilvy, directed by Rodrigo Saavedra, and narrated by Academy Award-winning actor Rami Malek, introduces The World of Absolut Cocktails, a world in which cocktails are personified through dynamic characteristics that align with different backgrounds, adult life stages, and peculiarities.

According to the brand, several other personalities will join as the campaign will expand globally.

The song used in the ad is “Saturday Love”, performed by Saturday Love, Fiorious, and K.O.N.

“This campaign brings our values to life through the personification of cocktails, a fun and fabulous world where everyone and anyone is invited. We believe that this is an idea that is universal because, after all, we are all born to mix,” Charl Bassil, Global VP Marketing – Absolut, The Absolut Company.