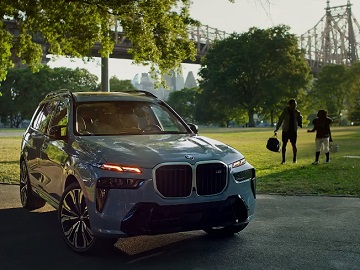 “The Ultimate Drive isn’t about success, it’s about remembering the road it takes to get there while looking forward to staying ahead of the curve and the drive to do more for my community,” the former professional athlete says in voiceover throughout the 30-second ad, which shows him in various settings, from the gym, where he trains hard to a shop where he tries on a blue suit, and the park, where he serves as a coach for a young boy who aspires to become a football player. He is also featured enjoying the comfortable interior of the all-electric 2023 BMW i7.

“No matter where life takes me, my drive never stops,” Cruz says at the end of the commercial, which also showcases the 2023 BMW X7 and the 2023 BMW M8 Competition Convertible, which boasts bold colors, beautiful upholstery, and bigger screens. Cruz also introduces the BMW as “The Ultimate Driving Machine”, which is a tagline for the automotive brand.

Victor Cruz is no stranger to advertising. Earlier this year, he appeared in Captain Morgan’s Super Bowl commercial, which promoted a revolutionary and totally ridiculous invention: the Super Bowl Punch Bowl.