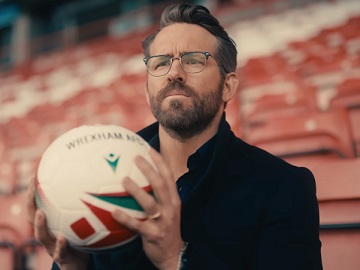 Ryan Reynolds stars in a new commercial. This time he promotes 1Password, a password security company he partly owns.

The ad, which marks the first work by the actor’s agency, Maximum Effort, for the brand, features Reynolds saying that, as the owner of Wrexham Football Club, he needs to watch out for the players.

“I’ve been a star for a long time. These guys have no idea what’s coming,” he also says in voiceover, before entering the team’s locker room. Once he’s there, he attempts to lecture them on cyber security believing this is a topic they’re all worried about. When he asks how many of them have heard of 1Password, Reynolds is surprised to see all of them raising their hands. Learning that they’ve also downloaded 1Password, he says he had no idea Wales was so cutting- edge and then, almost out of breath, he adds that 1Password completely secures your digital life. The players confirm they know and one of them, Mullin, says “Idiot”. At this point, Reynolds – who heard him – gets angry and threatens him to shove a red card so far up his ass people will think it’s his tongue. He then gets back to his speech, ready to talk nighttime skincare routines.

The 60-second commercial ends with the tagline “1Password. Simplest. Smartest. Securest” flashing across the screen. Reynolds says in voiceover the tagline, too, but he has some trouble pronouncing “Securest”.

Reynolds purchased Wrexham Football Club, which is the 157-year-old fourth-place soccer team based in the town of Wrexham, Wales, in 2021, along with Rob McElhenney (creator and star of “It’s Always Sunny in Philadelphia”). He has also invested in the password management platform 1Password, whose roster of investors also includes Robert Downey, Jr., and Justin Timberlake.