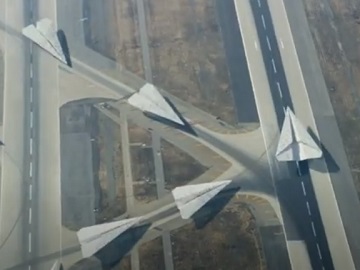 Xfinity sends one big letter of appreciation to its customers in a new commercial.

The spot features hundreds of paper planes sent to Xfinity customers across the nation, with special thanks for each of them, from the company, which says it has an opportunity to connect its customers to more of what they love through experiences that are Simple, Personal, and Awesome.

“Craig, thanks for being with us since 1996, Sam – Xfinity,” “Dear Maya, Welcome to the Neighborhood!” are only some of the messages delivered by Xfinity team members to Xfinity customers, who are delighted to received the cute, unexpected paper planes.

“From all of us, to every one of you” an onscreen line reads at the end of the commercial, which is set to the tune of Barry Louis Polisar’s 1975 single “Me and You”.

The song was featured during the opening credits of Jason Reitman’s film Juno, as well as on several ads, including of the National Lottery (United Kingdom), the Honda Civic “Date With a Woodsman”, and the Del Monte Foods “Bursting with Life”.