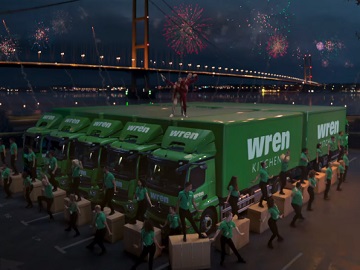 Wren Kitchens invites you to get your dancing shoes ready as its 2022 TV advert hits the screens this weekend.

Filmed across the brand’s Southend-on-Sea and Greenwich showrooms, as well as the famous OMA:X Film Studios, the spot is built on the premise of imagination, and the exciting journey that customers go on when visiting the greatest showrooms on earth, and features a dancing duo showcasing their gravity defying moves. The two dancers also put various kitchens into the spotlight while in the background a re-recorded version of Sammy Davis Jr’s “If They Could See Me Now”, from the 1966 Broadway musical Sweet Charity, plays.

The advert, which marks Wren Kitchens’ largest ad, has been directed by Golden Globe and Academy Award nominated filmmaker Michael Gracey, who made his debut in 2017 with The Greatest Showman alongside choreographer Ashley Wallen, who designed the routines for The Greatest Showman and Cinderella.