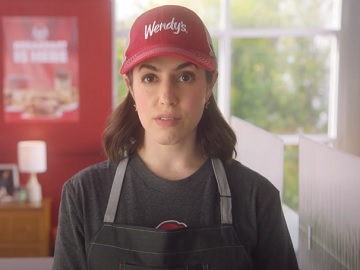 Wendy’s has released a new commercial to promote its Breakfast sandwiches.

The spot opens with Reggie Miller holding a tray with Wendy’s Breakfast sandwiches in a Wendy’s restaurant, where he even has a bed. Kathryn, a Wendy’s employee, explains that Miller chose to bubble at Wendy’s so he could wake up with the Official Breakfast of March Madness. At this point, Kenny Smith is shown knocking at the door and asking Miller to let him in. Kathryn says that Kenny chose somewhere else and it turns out this is the reason why he is left outside. “You know I can’t break the bubble, Kenny!” Miller tells Smith, who tries to point out that it’s everybody’s Wendy’s. He even admits he made a mistake and the wrong choice, referring to the food he got, but Miller does not give in and lets Smith out.

The commercial ends with the voiceover urging consumers to choose wisely and choose Wendy’s, Official Breakfast of March Madness.