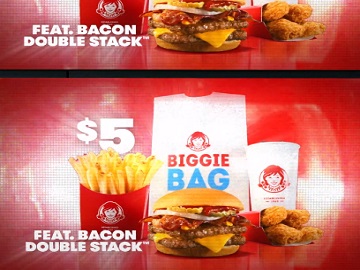 Wendy’s has released a new commercial for its Biggie Bag meal deal.

The spot features the crew of a starship as they receive a “major bag alert”. The captain learns that it’s Wendy’s Biggie Bag, which includes a Bacon Double Stack, nuggets, fries and a drink, all for $5. Seeing the captain left speechless, his assistant tells him that if she recalibrates the thrusters she thinks she can slingshot the spacecraft into the gravitational pull of a nearby Wendy’s. The captain urges her to do it immediately and the starship is then shown disappearing.

At the end of the commercial, which features DJ Khaled’s 2017 single “Major Bag Alert” (feat. Migos), the four Biggie Bag items – the Bacon Double Stack, four chicken nuggets, small fries and a small drink – are showcased on the screen, along with the tagline “Secure the Bag”.

The $5 Bacon Double Stack Biggie Bag is now available for purchase at most Wendy’s restaurants. The Bacon Double Stack, which was swapped out for the chicken sandwich Biggie Bag in May of 2020, is made with two beef patties, applewood-smoked bacon, cheese, ketchup, mustard, pickles and onion on a bun.