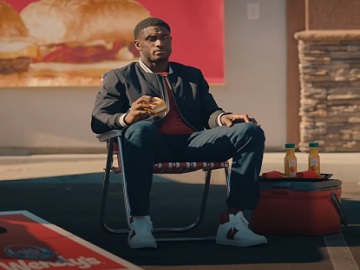 Wendy’s has released a new commercial to promote its Breakfast Croissants, now at just $1.99.

The spot opens with a Wendy’s employee saying that Reggie Bush used to have breakfast somewhere else but then he discovered Wendy’s breakfast and now they can’t get rid of him. The next scene shows Reggie Bush asking the same employee if he can believe that the Wendy’s Breakfast croissant he’s eating is only $1.99. The worker tells him that he can because he’s the one who put the sign up. Behind them, a sign featuring the deal on Breakfast Croissants can be seen.

In another commercial, Bush is presented as Wendy’s Breakfast Superfan, who asks for autographs to the workers making the croissants.

The fast-food chain has also collaborated with Reggie Miller in the past.