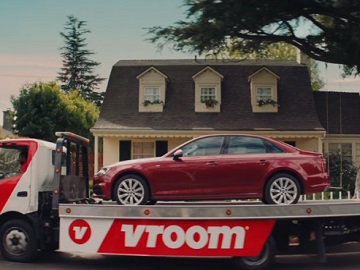 Used car dealer Vroom has released its 2021 Big Game commercial, urging viewers to buy their next car on Vroom and have it delivered it to their front door contact free, so they never have to go to a dealership again.

The 30-second ad, titled “Dealership Pain,” features a man tied to a chair in a dark room, which it turns out to be a dealership, where a sale representative intents to torture him with jumper cable leads. “So, are you gonna buy the car?” the salesperson asks the potential buyer, who’s all covered in sweat and asks him to let him go home and discuss things with his wife. “I’ve been here all weekend,” he also says. The creepy man from the dealership replies to the potential buyer that he can leave any time but soon after that he attacks him with the jumper cables.

However, as the customer falls over and the commercial comes to an end, it turns out that he had opted for a Vroom purchase instead. Sitting in the sunny front yard next to his wife, he watched a Vroom-branded flatbed truck rolling up to deliver his new car. “Well, that was painless,” he man concludes.

The voiceover says “Never go to a dealership again. Go to vroom.com, buy a car, and we’ll deliver it contact free.”