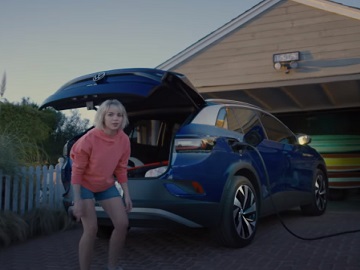 The spot, titled “Adventure Lifestyle,” features a diverse cast of ID.4 drivers who make a statement about how it was before they had the ID.4 SUV. A teenage girl sneaking around says that, before, her parents would have heard her taking the car, a man sitting in bed, holding his smartphone, says that, before, he didn’t have an app that showed him when she was taking the car, another man driving the ID.4 says that before there was no chance of an SUV handling more like a hot hatch, and a mother looking at her toddler falling asleep in his car seat says he won’t know a world before electric.

“Before it can change the world, it has to change yours,” the voiceover says at the end of the commercial, introducing the all-new, all-electric ID.4 as “the first electric SUV for everyone”.

Another spot, created in the same style, focuses on the tech upgrades and highlights that the ID.4 has zero direct emissions.

The five-passenger, fully electric crossover, with a starting price of $33,995, is part of the automaker’s effort to become carbon neutral by 2050. The ID.4 launches with three trims: the Pro, Pro S and 1st Edition.