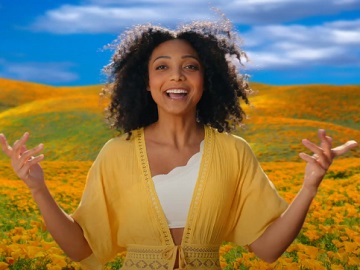 The spot features actress Noëlle Renée Bercy taking viewers on a journey through various places from the Golden State, showcasing the incredible attractions it has to offer.

“Here, in California, we believe in ‘What if’. After all, ‘if’ is our middle name. What if we could have the moon and the stars. Here, we welcome all widows with open arms. After all, there’s only one wrong way to win,” she says in the 15-second spot, which sees her jumping from place to place, such as the Golden Gate Bridge in San Francisco and the Hotel del Coronado in San Diego, where’s she’s swimming with some mermaids in the pool.

The commercial ends with a link toward visitcalifornia.com and with the tagline “California Dream Big” appearing on the screen. Viewers are also advised to travel responsibly.

Noëlle Renée Bercy is native of New Orleans and has starred in several TV series, including “King’s Bachelor’s Pad” and “Cloak & Dagger,” as well as short films such as “Signs” and “The Priest”.