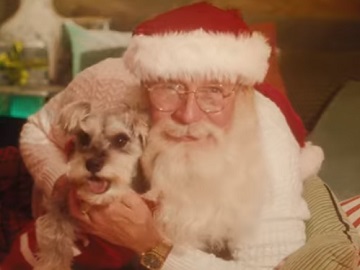 Virgin Hotels’ boozy Santa is back to the screens for a new holiday campaign.

The spot, which builds on Virgin Hotels’ successful 2020 holiday campaign, features Santa as a luxe-loving, debonair gentleman enjoying the amenities of a Virgin Hotel and asking viewers to go to him, this year. “You, guys, I’m literally ancient, so this year, you come to me,” Santa says while lounging in a king-size bed with a cocktail in his hand. He then mentions that, at Virgin Hotels, “They’ve got all of our faves” including chamber bells and a Schnauzer named Noodle.

The “Put A Twist on Tradition” campaign includes several 15-second ads featuring Santa inviting people to go to him this year.

Created by Sir Richard Branson’s Virgin Group and launched in 2010, Virgin Hotels aims to have all of its guests leaving in a better mood. “Everyone leaves feeling better” is the brand purpose. The British-based Virgin Hotels Group Limited also owns the Virgin Limited Edition, a portfolio of properties that include luxury resorts such as Necker Island.