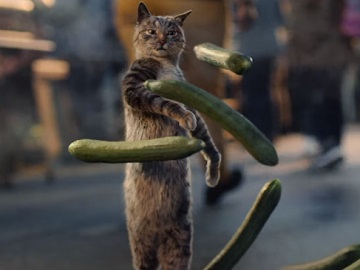 UK credit card provider Vanquis has released a new TV advert, which encourages people to take control of their finances and improve their financial future.

The spot, created by NOW and directed by Henry Littlechild at MPC Creative, aims to illustrate the feeling that a Vanquis credit card gives you by featuring a cat that is walking on his hind legs, confident, happy and proud across the city. People and animals are shown looking admiringly at him as he holds his head up high and walks tall and it soon turns out his confidence comes from using a Vanquis credit card.

“Start your journey to a better credit score with a Vanquis credit card,” the voiceover says at the end of the advert, adding the tagline “Wall Tall with Vanquis”.

The photo-realistic cat has been produced by global creative studio MPC, which produced both the live-action and VFX for the campaign.

The “Walk Tall with Vanquis” campaign, which mark’s the company’s first major campaign since 2019, runs across TV, radio and digital, and also includes an integrated PR and social campaign.

Thomas Allder, Customer Director at Vanquis, said about this new campaign that “it all started with focus groups, where our target customers told us that they wanted to see future-focused, positive messages when thinking about their finances. This is exactly what this campaign embodies. It puts Vanquis firmly back on the map, clearly communicating how we support people as they take back control of their financial future, boost their confidence and therefore walk that little bit taller”.