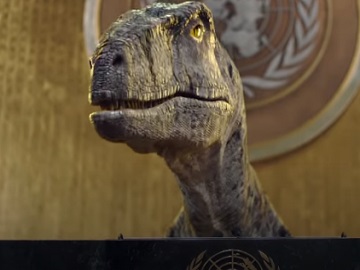 This is UNDP’s largest climate advocacy campaign to date and takes aim at the fossil fuel subsidies.

The spot features a dinosaur (“Frankie the Dino”) showing up in the halls of the UN General Assembly, asking world leaders and diplomats to act immediately to avoid “extinction” at the hands of climate change. After getting to the dais to speak, the unexpected visitor begins his speech by saying that he knows a thing or two about extinction and points out that, while humanity is headed for a climate disaster, governments spend, every year, hundreds of billions of public funds on fossil fuel subsidies. “Imagine, if we had spent hundreds of billions per year subsidizing giant meteors. That’s what you’re doing right now,” the prehistoric creature, which was brought to life using CGI and voiced by actor Jack Black, says, asking those present to think of all the other things they could do with that money.

The video ends with the dinosaur presenting his wild idea: “Don’t choose extinction! Save your species before it’s too late!” he urges the UN General Assembly.

The campaign also includes a Chrome plugin called Thesaurus Rex, designed to help people navigate the terms around fossil fuels online, an Alexa skill called “The Voice of Reason”, that “disarmingly rebuts every climate change myth or excuse”, a website called “Don’t Choose Extinction” to support the initiative, an e-book that “gives children the arguments they need to convince their parents and peers”, as well as Twitter account for Frankie the Dino, to continue to spread the poignant message with a dash of humor.