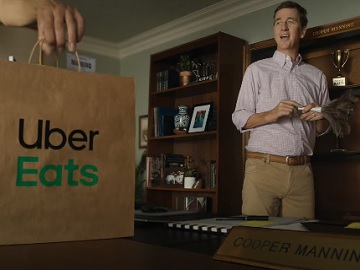 The spot shows Manning talking to someone on the phone and saying that, just because his last name is Manning, it doesn’t mean he’s going to do any old commercial. As he takes the headphone off, he looks at the camera and says “Tonight, I’ll be eating a delicious fried shrimp po-boy, fully dressed”. In no time, he gets his order delivered and concludes by saying “Now that’s a commercial”.

The video ends with the tagline “Tonight, I’ll be eating” flashing across the screen and with an onscreen line informing that Uber is the Official On-Demand Food Delivery Partner of the NFL.

Uber has enlisted several celebrities to star in its new “Tonight I’ll Be Eating” campaign. Among the latest are Lil Nas X and legendary singer Elton John. The two co-star in several commercials promoting the grocery, alcohol and convenience offerings available from the delivery service. In some of them, they switch iconic looks (while Lil Nas X wears the feathery outfit, Elton John wears Lil Nas X’s pink Versace cowboy suit from last year’s Grammys), ride playground horses and fight about whether fries pair well with mayonnaise.

“I’m so excited and honored to be working with the legendary Elton John on this Uber Eats campaign. We had so much fun on set deciding what’s for dinner and trying on each other’s most iconic looks,” said Lil Nas X in a statement.