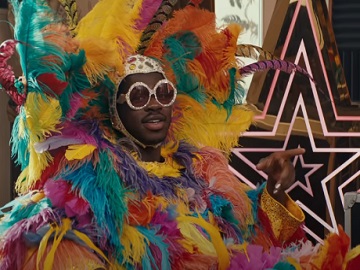 The spot, created by Special Group and directed by Guy Shelmerdine, features the “Industry Baby” performer wearing one of Elton John’s fabulous feather get-ups and saying he’ll also be needing some nail polish, a bottle of champagne and a box of chocolates, because he’s keeping it casual.

“Get groceries, alcohol, essentials delivered” an onscreen line reads at the end of the commercial.

“I’m so excited and honored to be working with the legendary Elton John on this Uber Eats campaign. We had so much fun on set deciding what’s for dinner and trying on each other’s most iconic looks,” said Lil Nas X in a statement.