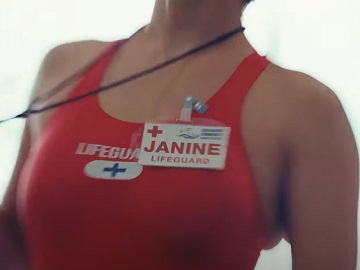 Uber promotes its Uber Eats food delivery app in a new commercial, highlighting that you can have convenience store items conveniently delivered to you.

The spot features a delivery guy looking for a woman named Janine at the pool for a delivery. There are several women swimming underwater and he thinks, for some reason, that Janine is one of them, so he tries to get their attention, but it soon turns out that Janine is actually the lifeguard.

The commercial ends with the tagline “Get Anything” flashing across the screen.

Earlier this year, UberEats added more transparency to its app and AG Karl Racine encouraged other apps to do the same. The food delivery app has been promoted by Wayne, Garth and Cardi B, who urged fans to “eat local” in Uber Eats’ Super Bowl LV commercial.