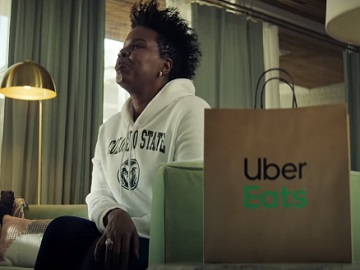 The 30-second spot, which debuted on the 18th of March and plays with the contrast between today’s polished and together ‘2021 Leslie’ and her total mess self from 2020, features Leslie saying she’ll be eating loaded tots for March Madness. “I didn’t give my madness last year, so we’re doing double the Madness this year,” Leslie from 2020 tells her clone, adding that she stays ready so that she doesn’t have to get ready.

“Buy One, Get One Every Game Day” an onscreen line reads at the end of the commercial.

This is the latest ad in Uber Eats’ ongoing celebrity match-up campaign, which has included Sir Patrick Stewart and Mark Hamill, Simone Biles and Jonathan Van Ness, and ‘Wayne’s World’s’ Mike Myers and Dana Carvey, alongside Cardi B.