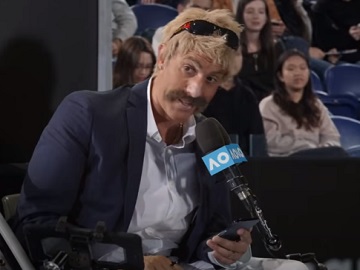 Uber Eats and teamed up with Sacha Baron Cohen for a new Australian Open campaign.

The Academy Award winning comedian and creator of Borat stars as the Rogue Umpire in a hilarious ad, alongside Australian tennis icons world number one Ash Barty and Nick Kyrios. Adorned with a handlebar moustache, peroxided hair, a green and gold sweatband and sporting diamond encrusted bling, the ocker umpire seems to be intended to keeping the score at “love” for as long as possible.

Uber Eats, the Official Online Food Delivery App and Uber is the Official Ridesharing Partner of the Australian Open, will post on Instagram a code that unlocks free menu items from selected restaurant partners every time the point score is at love during the Australian Open. When there is no longer love on the scoreboard the code will disappear.

The “New Rules Australian Open 2021” commercial is not the only one in the campaign. There also are others starring Cohen.