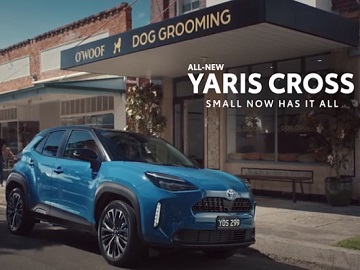 Toyota promotes its Yaris Cross in a new commercial, which focuses on the Siri integration.

The spot features a young couple who, after spending a day out in nature, are ready to drive back home, together with their dog. The latter, though, shows up in the last moment extremely dirty, which makes the woman ask Siri on their way back to the city to take them to the dog wash. They arrive there and, when the dog returns, all cleaned up, the woman notices that her boyfriend is also extremely clean and asks him how was that possible (since he was dirty when they left). She thus learns, to her surprise, that they’re running a two-for-one at the dog grooming place.

The commercial ends with the voiceover introducing the all-new Toyota Yaris Cross and saying the tagline “Small has it all” before the brand’s famous “What a Feeling”.