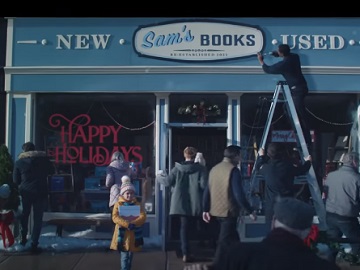 “When we come together, there’s nothing we can’t do,” this is the idea behind Toyota’s latest commercial, titled “The Bookstore”.

The ad, created by Saatchi & Saatchi and directed by Ted Melfi, tells the story of a young girl who sets out to help rebuild a local bookstore devastated by a fire, after seeing its logo on a book that her dad reads to her at bedtime. She goes across the town to inform people about her initiative of restocking the local bookstore and, as the video ends, it turns out she managed to collect hundreds of gently used books from the community members. They are delivered to the bookstore owner, an old man named Sam, with help from a Toyota Tundra and Toyota Highlander. Overwhelmed by the support he received and by the kind gesture of the girl, who gives him her favorite book, purchased from his shop when she was younger, the man says “thank you”.

Serving as soundtrack is Kacey Musgraves’ 2019 song “Rainbow,” taken from her third studio album, “Golden Hour”. The track is available for purchase on Amazon for $1.29.

The ad, which debuted during NBC’s “Christmas in Rockefeller Center”, will be complemented by another ad, created in CGI and produced in both English and Spanish.

Previous: ReCompare with GoCompare Mamma Mia Advert
Next: ChapStick Commercial: When the ChapStick Goes On, It’s On