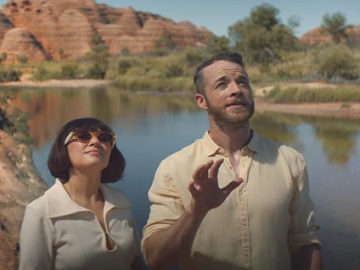 The two experience some of Australia’s greatest icons, experiences and offerings, including The Great Barrier Reef, which is a reef so big you can see it from space, The Otways, known as “the big tree place,” the Kangaroo Island, The Namadgi National Park, where the world’s greatest rock is, the Bondi Beach, Freycinet National Park, and Litchfield National Park.

“You know, Zo, I reckon Australia is the big thing,” Hamish tells his travel companion as they float in a lake in the Litchfield National Park at the end of the commercial, which ends with the tagline “Holiday Here This Year”. While the voiceover says “Let’s go big, Australia!”, viewers are encouraged – through an onscreen line – to visit australia.com or speak to their travel agent.