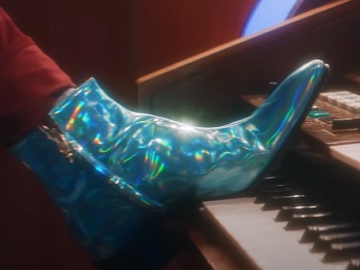 “This is the year to come back with a bang!” This is the idea of TK Maxx Christmas advert, which urges people to brace themselves for a performance to the maxx.

The spot features Laurie, a young organist who gives the performance of a lifetime at a local town festive comeback concert. Even though at the beginning he hesitates a little bit and hits some off-jey notes, encouraged by his sister and inspired by a pair of boots from TK Maxx gifted to him by his proud parents, the boy manages to impress the audience with his skills and get them up and dance to the rhythms of his own rendition of the iconic “Walk this Way” by Aerosmith.

The high street retailer aimed to get people right into the spirit of Christmas joy with its advert, created by Wieden+Kennedy London and set to run in several other European countries, including Poland, Austria, Germany, and the Netherlands.

The campaign also includes print, digital, social and PR, as well as a partnership with TikTok, where people are invited to participate in the #TKMaxxTalentShow and showcase their talents against a branded backdrop effect.

TK Maxx is the latest to unveil its Christmas ad. Very.co.uk, Boots and M&S, to name a few, have already released their holiday spot.