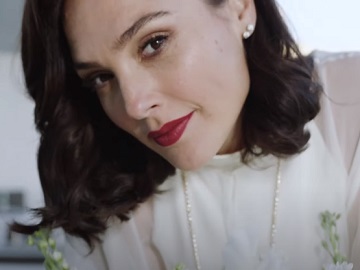 Tiffany & Co. showcases some of the pieces included in its upcoming Blue Book Collection in a new commercial, featuring actress Gal Gadot.

The spot gives viewers a behind-the-scenes look at the Wonder Woman star before presenting at the 2021 Golden Globes. Clad in a swingy white trapeze dress and strappy heels, she wears a 48-carat zoisite pendant necklace set in 18 carat gold and nearly 1,000 diamonds from the upcoming Blue Book Collection, which features a bicolor zoisite that shifts from violet-blue to purplish-red, depending on the angle. Other accessories include a diamond ring and a pair of round brilliant diamond earrings, which she displays elegantly, as she takes a look at herself in the mirror, dances, and smells a bunch of flowers.

Gal Gadot was one of the presenters for the 2021 Golden Globes, on February 28, and wore the same outfit. The necklace is a jewelry insider’s wink to her role as Diana Prince in Wonder Woman 1984, given the fact that, in the film, Diana Prince wears the Bone Cuff created in 1970 by Elsa Peretti.