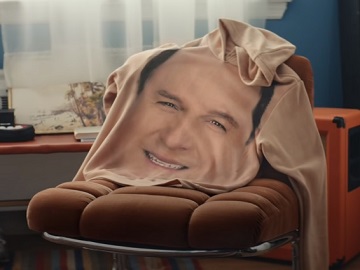 Titled “The Jason Alexander Hoodie,” the spot opens with the teenager’s mom entering his room and telling the boy he has to wash Jason Alexander. When her son tells her that “he looks clean to him,” referring to the hoodie, the woman makes him recall all the trials and tribulations his hoodie experiences in a day, from being drooled on by the family’s dog, being sat on and stepped on, being used as a cloth to wipe the smartphone display, being stuffed in a sweaty gym bag, along with dirty socks, and more. The funny part is that Alexander’s facial expressions on the hoodie change every time something like this happens to express how the hoodie itself might feel.

“It’s dirtier than it looks,” an onscreen line reads at the end of the 60-second commercial, which also sees the Seinfeld actor spotting the teenager wearing the Jason Alexander hoodie and telling him: “Hey, that’s my face, you can’t just wear my face. Give me back my face!”.

The song used in the ad is the 1981 single “Believe It or Not”, performed by Joey Scarbury, which serves as the theme song for the 1980s TV series “The Greatest American Hero”.

The commercial, created in partnership with Saatchi & Saatchi New York and Woven Collaborate, will air during the game’s second quarter.

The new Tide Hygienic Clean Heavy Duty 10X Power PODS removes both visible and invisible dirt from your garments, giving you a deep clean you can trust.