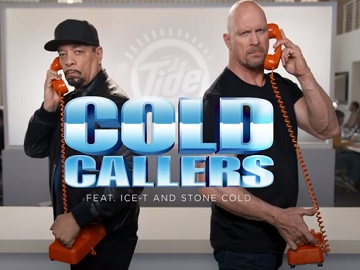 Tide has enlisted Ice-T and Steve Austin to star in its “Cold Callers” campaign, which urges people to use cold water when washing their clothes.

The spot features Annie Murphy of Schitt’s Creek getting a phone call from Cold Callers, who try to convince her to turn to cold with Tide. She initially wants to unsubscribe, but the duo give their best shot to achieve their goal.

Ice-T points out that using cold water can help the environment, but Austin realizes that she might be interested in another detail, so he doesn’t hesitate to highlight that this change will save her money, around 100 dollars/year on her energy bill. “It’s like getting paid for doing nothing,” Ice-T adds, which makes Annie declare she will take that money for the environment.