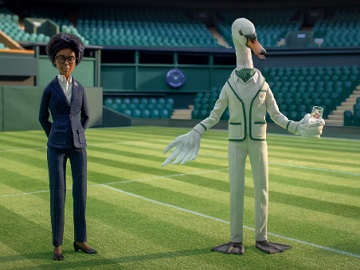 Sipsmith Gin has released a hilarious new commercial created by Ogilvy, to announce its partnership with Wimbledon.

Inspired by the craftsmanship found around every corner of the Wimbledon grounds, from the exacting 8mm cut of the Centre Court lawn, to the iconic umpire chair – reserved only for umpires, the spot features the brand’s mascot, Mr. Swan, announcing the news but the other way around. The well-dressed waterfowl says that the grass he is standing on is the official manicured grass of Sipsmith Gin, the machine ball and the handmade high chair (reserved for umpires), and more are of Sipsmith Gin.

The end of the ad sees Mr Swan declaring that he’s mowed his face into the grass and that Wimbledon is the Official Tennis of Sipsmith Gin, even though the woman near him tried several times to point out that he’s wrong.

The gin brand has also released a limited-edition of its award-winning London Dry Gin to celebrate its partnership with Wimbledon.