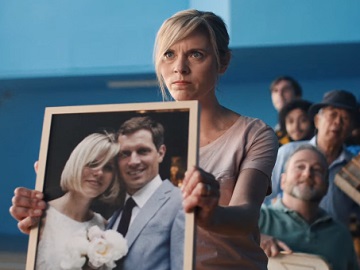 The National Lottery highlights that, “When you play a little, you help our athletes a lot,” in its latest ad, which informs that funds from sales go directly towards supporting elite athletes, including Olympic competitors.

Created by agency Adam&EveDDB, the spot features a diverse range of situations in which people are helping athletes train. A woman shows up in front of taekwondo athlete Lutalo Muhammad with her wedding picture, asking him to smash it, dozens of people are holding Chinese lanterns for race walker Tom Bosworth, other people help wheelchair tennis player Jordanne Whiley MBE train by acting as her opponents and using pots as racquets, an old lady gives sprinter Jonnie Peacock MBE a cup of tea. Thrower Dan Greaves and paracanoeist Emma Wiggs MBE are also featured.

“There is an easier way to support our athletes. Just play The National Lottery. When you play a little, you help our athletes a lot,” Dermot O’Leary, who serves as voiceover, says at the end of the spot.

The ad, which debuted during England v Denmark, will be complemented by several others ad, set to air during the Euro Final on Sunday, Coronation Street and Love Island.

The fully integrated multi-channel campaign is set to run throughout the summer across TV, Radio, Digital and high-impact OOH, as well as on all owned National Lottery channels and in 44,000 National Lottery retailers across the UK.

Players will also be given more chances to win with a special edition Gold Scratchcard and special event Lotto and EuroMillions draws.