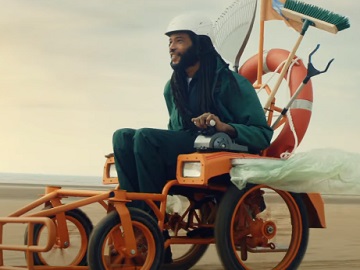 The National Lottery highlights, in its latest ad, created by Adam & Eve/DDB, that – thanks to National Lottery players – £30 million goes to good causes every week, from funding community sports and museums for all to enjoy, to helping people explore the great outdoors.

“When we all play the National Lottery a little, fun stuff happens, from community sports to keeping up beaches clean and safe, and bringing history to life. Then there’s funding museums for all to enjoy, supporting inspiring music programs, and helping people explore the great outdoors,” the voiceover, Dermot O’Leary, says in the opening the 60-second advert, which features a lottery player in a wheel chair who, after playing the lottery on his phone and disappearing around a corner, intersects himself with a variety of scenarios that illustrate all these causes – from a skate ramp to a beach where he faces an mob of Vikings. Luckily, his outfit gets immediately updated so that he wouldn’t be in danger. A long beard, a furry tunic and a horned helmet help him blend in with the environment and, later on, after passing by a set of dinosaur bones, his wheelchair produces a paragliding parachute and he floats up into the sky.

The soundtrack music is Bob Dorough’s single “Three is a Magic Number”, from Multiplication Rock! series.

The campaign, which debuted on Saturday, 1 May, runs across TV, Radio, Digital and OOH. According to the National Lottery, to date, over 625,000 projects have received National Lottery funding.