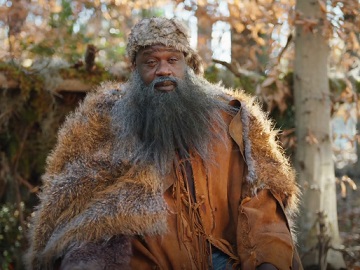 The General has released a new ad featuring Shaquille O’Neal. This time, it turns out he ended up left deep in the woods because he had recommended to Craig Robinson and some friends to check out The General for car insurance.

The spot features Robinson and some friends hiking into the woods and finding O’Neal with long beard, wearing furs and cooking a skunk. “Shaq, remember you telling us to check out The General for car insurance so we left you deep in the woods?” Robinson asks the basketball legend, who doesn’t say a word, but gives him a meaningful look.

Robinson goes on by saying that it turns out he war right about The General. “They’re actually a quality insurance company,” the comedian adds, urging O’Neal to get out of there. The latter asks him to wait for five more minutes because his skunk must finish cooking.

O’Neal is known for starring in commercials for several other companies, including Gold Bond, Buick, AriZona Cream Soda, and Icy Hot, just to name a few.