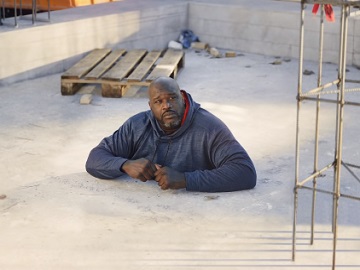 After having been left in the woods by Craig Robinson and his friends, Shaquille O’Neal ended up in another unfortunate situation for recommending The General. This time he is burried in concrete.

The spot features the athlete in a cement block and three construction workers near him, who reveal that he got there by suggesting The General for car insurance. At that time, he had been considered “out of his mind” but now the workers admit that The General is actually a quality insurance company, that’s been saving people money for nearly 60 years and they’ve misjudged it based on its commercials.

The commercial ends with the workers ready to chip O’Neal out of the concrete and start by throwing a pair of protective glasses into his head. “Nice pass,” the NFL legend ironically says.

“For a great low rate and nearly 60 years of quality coverage, make the right call and go with The General,” O’Neal, who is the company’s spokesman, says in voiceover at the end of the commercial.

O’Neal is known for starring in commercials for several other companies, including Gold Bond, Buick, AriZona Cream Soda, and Icy Hot, just to name a few.