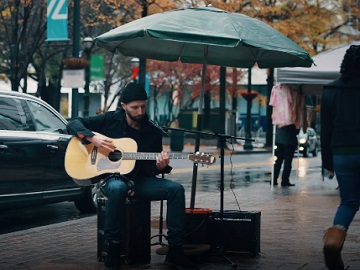 The General has released a new commercial to highlight that it has been offering quality car insurance at affordable rates for nearly 60 years.

The 15-second spot features a street musician who was kicked out of a band for having recommended The General for their car insurance, being approached by his former bandmates. They stop the car to let him know that he was right about the insurance company. “They’re actually a quality insurance company that’s been saving people money for nearly 60 years,” one of the former bandmates says.

The commercial ends with the voiceover urging viewers to fo with The General “for a great low rate and nearly 60
years of quality coverage”.

Another similar commercial features Shaquille O’Neal, who is the company’s spokesman, found again in the woods by a group of people, led by Craig Robinson, who left him there for having told them to check out The General for car
insurance. Wearing fur as a coat and a very long beard, sign that he has been living in the wilderness for quite a while, he tells Robinson to wait for five more minutes for him because his skunk is almost done.