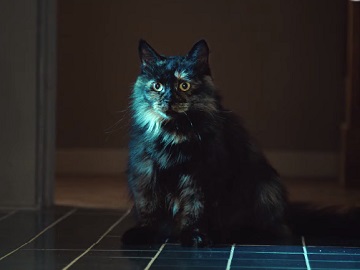 the spot features a cat owner in a bathtub who whispers, while being watched by his cat, that if cats were bigger, they would try to eat their humans. he also says he has decided to treat his cat this Halloween with the new TEMPTATIONS MixUps Tasty Human cat treats to satisfy his craving.

“Treat your cat to Temptations Tasty Human before they treat themselves to you,” the voiceover says at the end of the commercial, which also sees the tagline “all it takes is a shake” flashing across the screen.

This ad is joined by another one, which features another cat owner – a man in a bed – who also says that, if cats were bigger, they would try to eat their humans, and shows the bag of Temptations Tasty Human he has purchased for his pet.

The new limited-edition TEMPTATIONS Tasty Human MixUps, available throughout the Halloween season at major online retailers and in-store at select retailers nationwide, feature Chicken, Liver and Beef Flavors. Each treat has less than two calories and delivers a terrifyingly tasty combination of crunchy and soft textures.