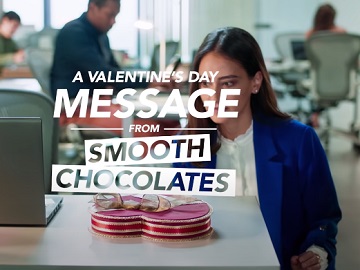 Teleflora has released a new ad to promote its Valentine’s Day bouquets, which are “beautiful, handcrafted, and entirely safe for work”.

The 15-second spot features Tina, a young woman who receives a heart-shaped box of smooth chocolates that also carry a message for her. Hearing the box singing, she tries to shut it down and immediately collect the confetti from her desk, worried that her colleagues might hear it, too, but the box keeps insisting.

“You thought I went away but I’m baaaa…” the song says. However, she clearly doesn’t want to listen to it until the end as she grabs the box and holds it tight to her chest. “Hey, I’m still here,” a slower voice is heard.
The commercial ends with the tagline “Flowers say it best” flashing across the screen.

Another spot features a teddy bear that reminds Sarah, the woman who received it as a Valentine’s Day gift, that his name is Teddy, not “a cuddly symbol of your inability to be in a serious relationship”.