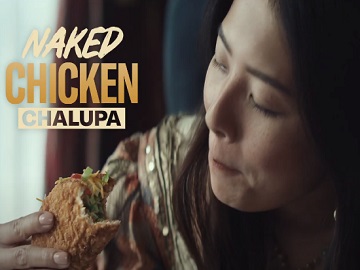 Taco Bell has released a new ad campaign for its Naked Chicken Chalupa.

The spot, titled “Chicken Philosophers” and available as a 30- and 15-second version, features 18th century-style philosophers in a heated chicken debate, arguing over the seemingly indistinguishable difference between chicken sandwiches. However, it turns out that there’s a different way to chicken with Taco Bell’s Naked Chicken Chalupa.

First introduced in 2017, the Naked Chicken Chalupa includes marinated white meat chicken rolled in a crunchy coating and fried crisp inside the chalupa with lettuce, cheddar cheese, diced tomatoes and avocado ranch for $3.49 or in a box for $5.99, which includes a beef burrito, crunchy taco and medium fountain drink.

The fan-favorite menu item is available for purchase nationwide since May 20. Taco Bell Rewards members had the opportunity to enjoy it since May 19th via the Taco Bell app.

The “Chicken Philosophers” ad will be complemented by a moku-mentary titled “The Great Chicken Wars”.