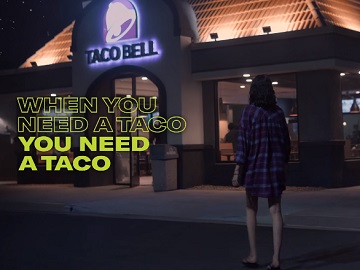 “When you need a taco, you need a taco” – this is the tagline of the latest Taco Bell commercial, which promotes the fast-food chain’s new Cantina Crispy Melt Taco.

The spot features a young woman who meets a guy at a party, on the beach. After changing a few looks, they head to the ocean together, willing to know each other better. However, when she’s about to kiss him, she realizes she needs to eat a taco so she immediately turns her back on him and goes to a Taco Bell restaurant to grab a Cantina Crispy Melt Taco.

The song used in the commercial is BLOW’s 2019 single “Dancing Waters,” from their “The Limits / Dancing Waters” album.