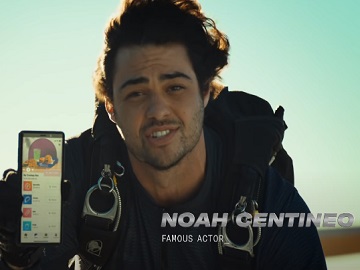 “Don’t let someone tell you how to eat. Build your own $5 Cravings Box, exclusively online or with the Taco Bell app”. This is Taco Bell’s message for consumers in its latest commercial, which promotes the customizable $5 Cravings Box.

The spot opens with actor Noah Centineo skydiving on a plane and saying that he just used Taco Bell app to build his own $5 Cravings Box. When he starts listing what his box has, such as crunchy tacos, a camera woman bursts into laughter, ruining the scene. She reveals she gets a crunch wrap and then several other people are featured with their favorite Taco Bell menu items, which they obviously include in the $5 Cravings Box. One crew member goes for a five-layer beefy burrito, a biker for a bean burrito, a woman in an office for cheesy gordita crunch, a radio host for the cinnamon twists.

The commercial ends with the tagline “Eat Like You” flashing across the screen and with Centineo saying that this was literally was he was going to say. The voiceover also urges viewers to get their own $5 Cravings Box.

The $5 Cravings Box is available at limited participating US location for a limited time, through web or app pay ahead orders only.