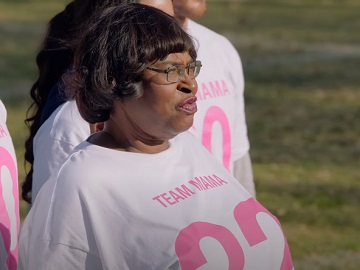 T-Mobile had Anthony Anderson and his mother co-star in one of its Super Bowl 2021 commercials.

The spot features the “Anderson Family Bowl,” a football game between two teams: one led by Anthony and the other by his mom. They share their family “drama” on T-Mobile, including the “hardcore trash talk,” giving their distant relative to see every highlight, ugly low light and live every second of the game.

The narrator also declares that with T-Mobile 5G you could call in a ringer, like star tight end Travis Kelce. Kelce makes an appearance in the ad as a player in Team Mama, which leads to a joke about Anthony not knowing many things about his family.

“Together, you and Travis Kelce would put on a display of speed and power and crush the competition, just like T-Mobile 5G,” the voiceover says toward the end of the commercial, adding “Don’t trust your family drama to just any network. T-Mobile is the leader in 5G”.

Super Bowl 55 was played on February 7, between Tampa Bay Buccaneers and last year’s champion, Kansas City Chiefs. The latter was defeated in their home Raymond James Stadium in Florida, thanks to Tom Brady, who led his team to a 31-9 victory against the Chiefs.