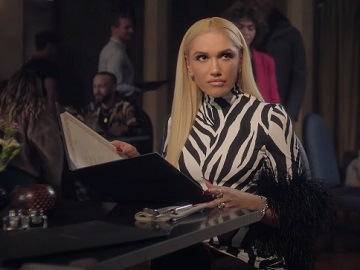 T-Mobile has enlisted Adam Levine, Gwen Stefani & Blake Shelton to star in one of its Super Bowl 2021 commercials.

The spot sets the action a few years ago and opens the Maroon 5 singer setting Gwen up with Blake Shelton after a video call on a spotty network. Gwen tells him that she’s ready to start dating again, but she’s sick of LA guys and wants “someone completely different, maybe from another country, and someone cultured and sensitive, and who’s not threatened by a strong, confident woman.” “Thanks” to the spotty network, Levine understands that Gwen wants “someone completely country, uncultured, and threatened by a strong, confident woman,” and decides to set her up with Shelton, who’s with him in a diner.

The end of the commercial sees Shelton showing up at his date with Gwen, in a fancy restaurant, with his spurs jingling. Asked if he rode a horse there, the country musician says he did.

“Don’t trust your love life to just any network. T-Mobile has more number ones in 5G than any other network,” the voiceover says at the end of the commercial.

The other two ads feature a football game between Anthony Anderson and his mother and their respective teams, with a guest appearance from star tight end Travis Kelce, and a video call between Tom Brady and Rob Gronkowski.