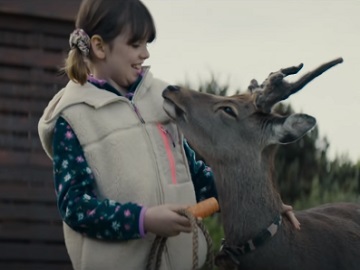 SuperValu Ireland has unveiled its Christmas advert and encourages people to “Share the Magic”.

Filmed at Seafield in the Dunbar area of Wicklow town, the spot tells the story of a Aoife, a 9-year-old girl who found, one morning, a wounded reindeer baby in her back garden. She takes care of him day after day and, believing that Deermuid the Deer is Santa’s helper, she urges him to get back to Santa in time for Christmas. The animal hesitates, but all the neighbouring children get out of their houses to encourage him so he eventually takes flight, making everyone there believe in the magic of Christmas.

“SuperValu. Share the Magic” onscreen lines read at the end of the advert, along with the hashtag #WeBelieve.

“We are excited to release our 2021 Christmas ad and hope that viewers across the country can connect with and find moments of belief and joy in Deermuid the Deer, little Aoife and the community of children that support them. (…) The advert demonstrates that there is always magic to share at Christmas and I’m confident that this will certainly win the hearts of the nation,” Shane Lynch, retail marketing manager, SuperValu, said in a press statement.

Deermuid the Deer, who is in fact named Deermuid in real life, is nine years old and lives in Kilmacanogue, Bray, Co. Wicklow. His loyal companion, Aoife, is played by Penny Lynch, a 9-year old who attends Realta School of Speech and Drama.