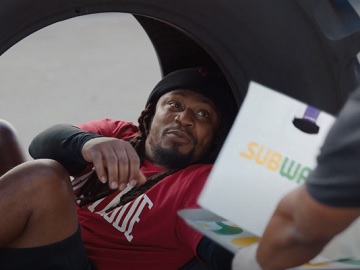 Subway urges you to power up like Marshawn Lynch and Go Pro at Subway for double the protein on any Footlong or New Protein Bowl for just $2 more.

The 30-second spot features Lynch training with a huge tire and saying “when you want to power up, go pro at Subway for double the protein on Footlong Subs or the new Protein Bowl.” He also adds that, “if you want to go pro like Marshawn, don’t let anything get in your way” and gets into his tire and visits a Subway restaurant to collect his order.

At the end of the commercial, which also highlights the chain’s status as Official Sandwhich Sponsor of the NFL, the voiceover urges viewers to “go pro for double the protein for just $2 more on your favorite Sub or new protein Bowl” and adds the Subway tagline, “Eat Fresh”.

The Oakland native NFL star is the owner of a restaurant in Emeryville, called Rob Ben’s Restaurant and Lounge, which opened in December 2018 and was featured on the Paramount Network’s series “Bar Rescue”. The restaurant wasn’t actually new, though. It had been owned and operated by Cassie Nickelson from 1983 through 2017 and it had the name “Scends Restaurant”.