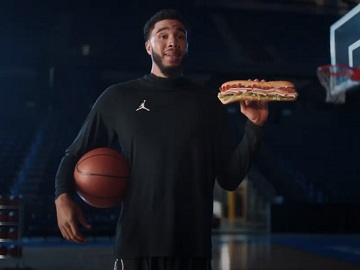 Jayson Tatum and Draymond Green are talking subs and more in the latest commercial released by Subway.

The spot opens with the Celtics forward Jayson Tatum introducing himself and urging viewers to check out his Subway sub with delicious turkey and crispy bacon. Draymond Green follows him, presenting his own Subway sub, which is made with tender steak and melty cheese.

The two basketball players start then bragging about what their subs can help you do. Tatum says his sub will hekp you put points on the board unlike some other subs, which makes Green ask Tatum why he would say that. “Hey, man, I’m just talking about subs here,” the Celtics forward says, but the Golden State Warriors power forward doesn’t believe him and fights back with a statement that leaves Tatum speechless: “My sub has more rings than your sub.” The only thing that Tatum adds at this point is that his sub has bacon.

The commercial highlights that, if you buy one footlong, you get one 50% off in the Subway app, with promo code “BOGO50”.