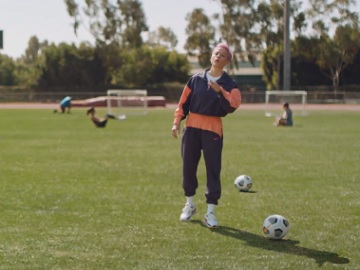 Subway has released a new ad to promote its Footlong.

The spot features Megan Rapinoe urging a young man who was intended to get some burritos for lunch to get a freshly made Footlong from Subway, instead, with crisp veggies on freshly baked bread. The American soccer, who player uses footballs to help her “motivational speech’ and convince the guy to order in the Subway App. Another man who’s eating a burger nearby becomes Megan’s “target” too.

“Choose Better. Be Better,” the voiceover says at the end of the commercial.

Megan Rapinoe, the co-captain of the U.S. Women’s National Team, was the Sports Illustrated’s Sportsperson of the Year in 2019, becoming thus the fourth woman in the award’s 66-year history to win it.

Subway has also teamed up with Celtics forward Jayson Tatum, Golden State Warriors power forward Draymond Green, who have presented they own Subway Subs, the Bacon Tatum and the Draypotle Steak, respectively, NFL running back Marshawn Lynch, who promotes the chain’s new Protein Bowls, and NFL legend and notorious high-stepper Deion Sanders, who urges consumers to order online or on the the Subway app their favorite menu-items.