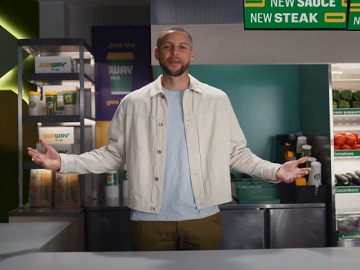 Subway has enlisted legends across the sports world for its newest ad campaign, titled “Eat Fresh Refresh,” which celebrates the biggest changes in Subway’s history.

One of the spots features Seven-time NBA All-Star and Two-time NBA MVP Stephen Curry presenting some of the new sandwiches, including the All-American Club, the Turkey Cali Fresh, and the Steak & Cheese.

“Where there’s so much new, some say you can’t fit in one ad. I say we’re talking a new All-American Club, Deli Style Oven Roasted Turkey and the new Steak & Cheese, the one with new (secret) seasoning.

As he talks about the menu additions, Curry sees the Subway logo flashing across the screen and realizes he’s out of time. The commercial ends abruptly, with the basketball player not finishing the word “time”.

All the commercials are voiced by basketball legend turned Charles Barkley. As the new voice of Subway, the incomparable Barkley lends his humor and familiar tone to these breakthrough ads.

“The Subway Eat Fresh Refresh campaign brings to life how much new we have on our menu and is a significant moment in the brand’s transformation journey. As such, one single creative execution or spokesperson wouldn’t have been enough,” said Carrie Walsh, Chief Marketing Officer, Subway.