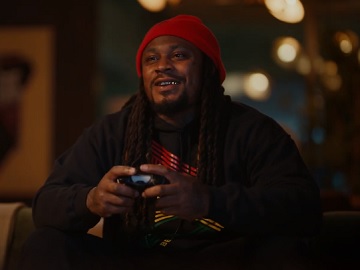 Subway has released a new ad featuring Marshawn Lynch. The NFL running back urges consumers to go PRO for double the protein for just $3 more on any Footlong or new Protein Bowls.

The 30-second spot features Lynch encouraging viewers to not make an Amateur mode and go PRO instead at Subway for double the protein on Footlong and new Protein Bowls. “And if you wanna go pro like Marshawn, you gotta feed virtual Marshawn,” he adds, feeding a tiny virtual Marshawn in a video game by telling him to eat the Footlong he’s holding. The game character gets thus into Feastmode and starts spinning, which makes Lynch a little bit confused.

In a previous commercial, Lynch is shown training with a huge tire and using it as a transportation means to get to a Subway restaurant and collect his order.

Oakland native NFL star has also been enlisted by Microsoft to star in its new campaign for Microsoft Surface Duo.