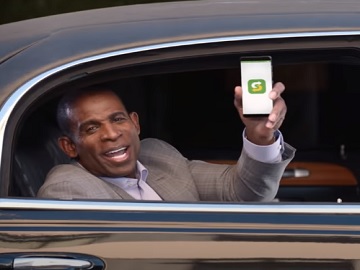 Subway has released a new ad featuring Deion Sanders to highlight that you get 15% off when you order a Subway Footlong in the Subway App or Online.

The 15-second spot features Sanders arriving in front of a Subway restaurant in a limo and urging viewers to pick up (their orders) like a pro. “Just order on the Subway app and it’s ready to go with contactless curbside,” he also says and moves in the hot tub from behind the limo to enjoy his Turkey Sub.

At the end of the commercial, the voiceover informs that you get 15% off any Footlong when you order in the app.
Onscreen lines also inform that the discount is available with the promo code 15OFF and that additional charge for extras/add-ons applies. The offer is redeemable at participating restaurants for app/online orders only.

Subway, which is the Official Sandwich Sponsor of the National Football League (NFL), teamed up with Sanders earlier this Fall, in September, for a campaign that aims to bring players and fans together through a friendly competition to get them dancing on-the-field and on social media to raise money for a worthy cause – NFL PLAY 60, the NFL’s national youth health and wellness program that encourages kids to get physically active for at least 60 minutes a day.

One of the commercials, which promotes the new Buffalo Chicken and BBQ Chicken Footlong, features the NFL legend and notorious high-stepper giving autographs to his fans and encouraging them to go to Subway or order online and enjoy the sandwich chain’s menu items.